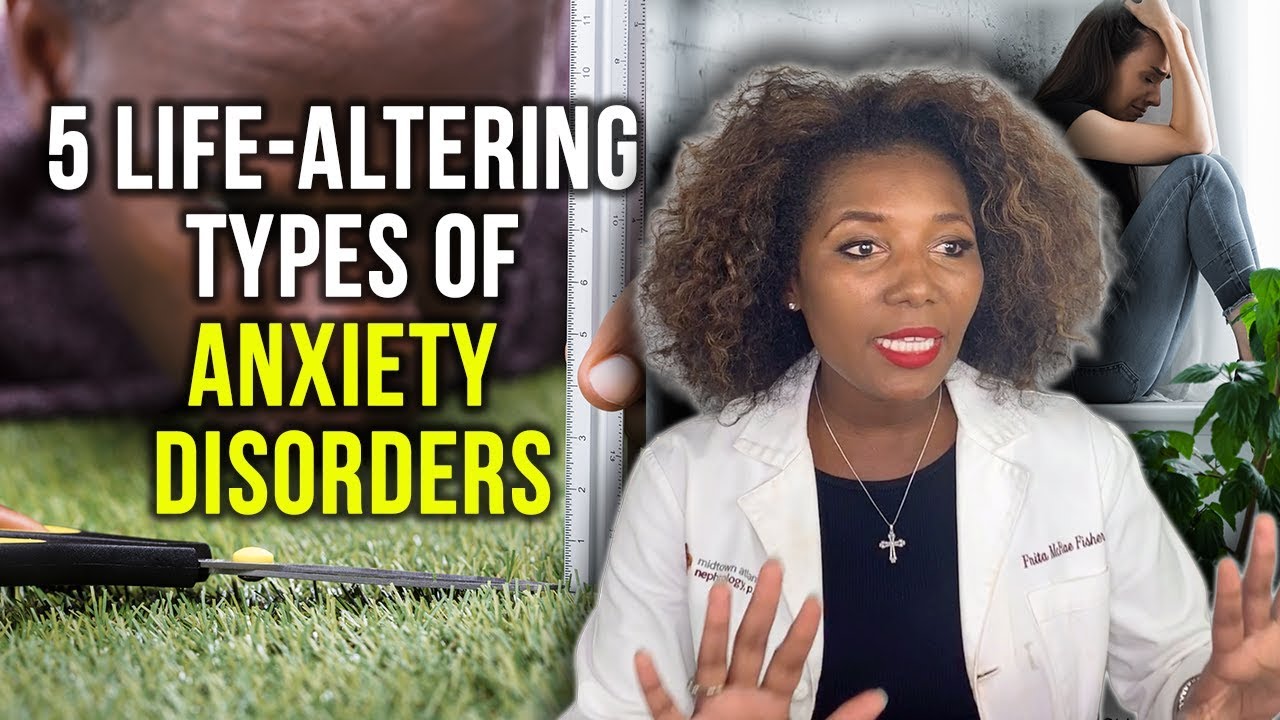 Today, we’re going to discuss five types of anxiety disorders you should know.  Are you a worrier?

No, I’m not talking about having appropriate concerns or uneasiness every now and then.

What I’m asking is this: Do you have an excessive, consistent, and persistent worry that causes you distress or even impairs your life?

Or let me rephrase: Have you ever locked the front door, and, knowing that you locked that front door, you still had the thought of the possibility of it being unlocked?

You then had to go and lock it again and kept checking over and over again to check if the door is locked. If this sounds like you, then you may have an anxiety disorder.

But don’t worry. You’re not alone. Anxiety disorders are the most common mental disorder in our country, according to the Anxiety and Depression Association of America (ADAA). An estimated more than 18 percent of the U.S. population has an anxiety disorder. 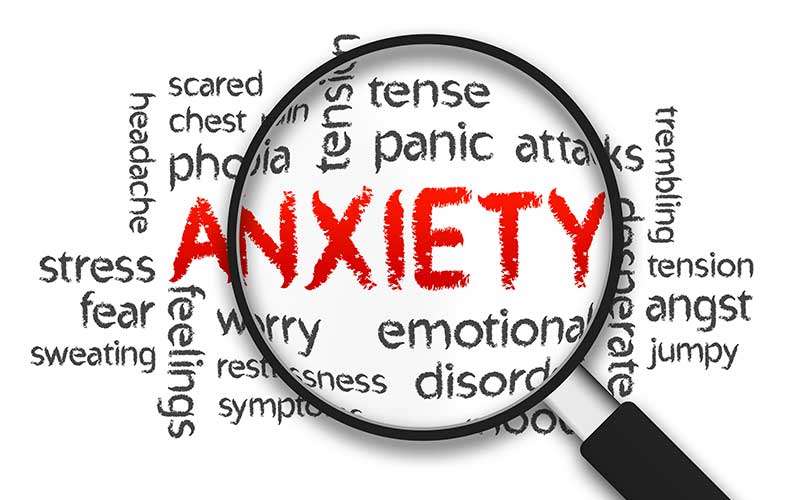 Anxiety, in and of itself, is a normal part of life. It is a nervousness, or an uneasiness, anticipation of impending doom or an adverse event.

It becomes an anxiety disorder only when the excessive worry and the consistent intrusion of thoughts actually cause distress or impairs one's life.

Some symptoms of anxiety disorders include persistent worry, difficulty sleeping, inability to relax, forgetfulness, and fatigue. Also, you may suffer from frequent or reoccurring headaches, neck or shoulder pain, back pain, stomachaches, or dizziness.

According to Mayo Clinic, other signs of anxiety include sweating, trembling, feeling weak or tired all the time, hyperventilation, an increased heart rate, having a persistent sense of impending danger, and panic.

It is perfectly normal to have some worry, some anxiety but only as long as there’s a healthy amount of worry or anxiety.

Generalized anxiety disorder, or GAD, is different. This type of anxiety disorder is an excessive, consistent, and persistent worry that causes a great deal of distress and negatively impacts your life.

For example, let’s imagine that you’re unemployed. You need a job. Now, you have yet another job interview coming up. But all of a sudden, you have so much intense worry about things that may go wrong that things get out of control.

You worry that your suit might not be the right fit and that all the buttons may pop off, which would cause other people to humiliate and scrutinize you.

Now you have difficulty sleeping and become irritable. It gets to the point where this intense fear and anxiety spirals out of control, prompting you to cancel yet another job interview.

This impairs your life because you need a job but can't get one because of your generalized anxiety disorder.

In order to have the diagnosis of GAD, this impairing anxiety must occur more days than not and for at least six months.

According to Harvard Medical School, women are twice as likely as men to have a generalized anxiety disorder. This mental illness is also common among patients with chronic pain, especially if chronic pain cannot seem to be diagnosed medically.

Many people tend to mistake stress for GAD. If your workplace is a significant source of stress, you have to learn how to manage stress in the workplace.

Obsessive-compulsive disorder, or OCD, were classified as an anxiety disorder. However, now it has a classification of its own. Still, we’re going to include this type of mental disorder in our list because anxiety is an integral part of OCD.

An estimated 1 in 40 adults in our nation has OCD, according to the National Institute of Mental Health (NIMH).

Obsessive-compulsive disorder is characterized by repetitive, intrusive, and persistent thoughts or urges. Basically, there are the obsessions that cause anxiety.

A person with OCD can relieve the anxiety by performing repetitive behaviors or mental acts, or the so-called compulsions.

Usually, these obsessions or urges are not warranted. But for a person with OCD, he or she absolutely must perform the compulsive act in order to relieve the anxiety.

And typically, there is a rigidity in these acts that must be completed in order to make the person with OCD feel relieved. 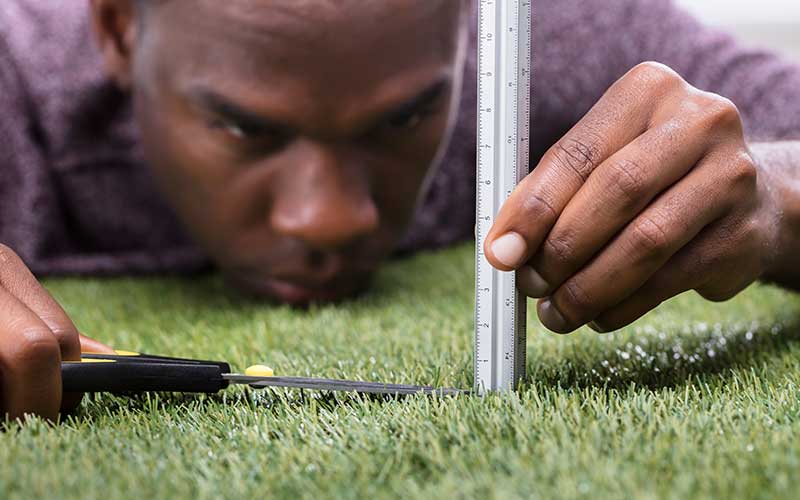 For example, if the obsession is contamination, or feeling dirty, then the compulsion might be to wash one’s hands. Note: I don't mean the person sitting next to you in the cubicle who loves to use Purell or hand sanitizer every chance he or she gets.

I’m talking about an actual obsession with handwashing. That person is constantly thinking and worrying about their cleanliness, and it drives them to wash their hands repeatedly.

Sometimes, people with OCD wash their hands so frequently that their hands become chafed and start bleeding. Some can even get an infection. That is an example of what someone with the obsessive-compulsive disorder has to go through.

Another example of a potential obsession is symmetry. If a person is obsessed with things being symmetrical and in order, the compulsion may be to count items over and over again or to reorganize their pantry so that all the cans are in perfect balance in color and size.

Or a person obsessed with symmetry may reorganize their towel closet over and over again so that all the towel sizes and colors are in order.

Usually, a person develops OCD in childhood or adolescence, and the condition can last a lifetime. Obsessive-compulsive disorder can overlap with other mental illnesses, including generalized anxiety disorder.

About 76% of people with obsessive-compulsive disorder also have GAD. Meanwhile, 63% of patients with OCD have an associated mood disorder (AMD) and most commonly major depressive disorder.

Panic disorder is an abrupt, spontaneous, and intense fear that leads to physical symptoms such as difficulty breathing, chest pain, and hyperventilation. An estimated up to 3% adults in the U.S. have panic disorder, according to the NIMH.

A traumatic event can trigger those panic attacks. For example, if a person has been bitten severely by a dog, then watching a movie like The Secret Life of Pets may actually trigger a panic attack.

Or if a person has an extreme fear of flying, then watching a Delta commercial or merely looking at a flight attendant may trigger the panic attack.

Some people get panic attacks because they are stressed out, which is why you need to reduce stress levels. Read more about how stress affects your body and ways to live a stress-free life. 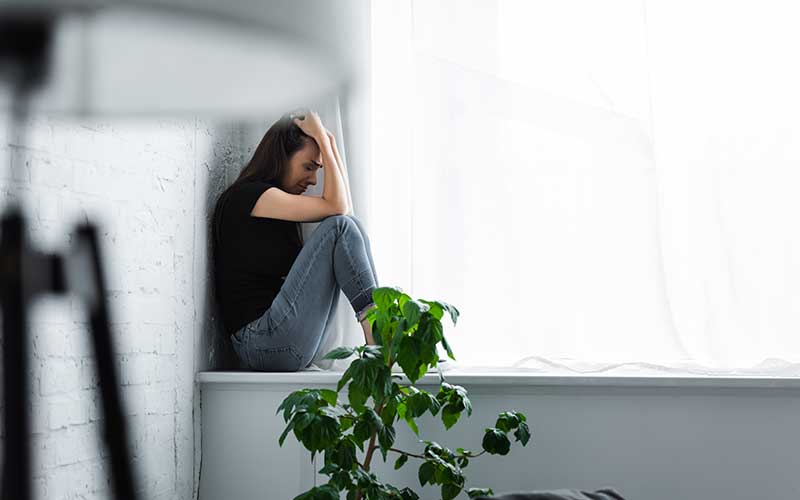 Social anxiety disorder – or SAD – is an intense fear of embarrassment, humiliation, scrutiny, or judgment in social settings or in settings where one has to perform or speak in front of a large audience.

For example, let’s say there is a person with SAD who works with computers all day and is socially isolated.

He doesn't have to deal with other people. Now, he’s doing well in his job and can get a grand job promotion. To get a promotion, he has to make a presentation to others in the company.

He may have such an intense fear of humiliation, failing, or embarrassment that this person may opt not to do the presentation. Basically, this person is forfeiting getting the promotion and risks losing his job. And all because the social anxiety is so intense.

That is an example of what may happen to a person with a social anxiety disorder. The things that you do to avoid anxiety can actually impair your life.

According to the U.S. Department of Veterans Affairs, an estimated 8 million adults have PTSD during a given year.

One of the examples of patients who may have PTSD is a veteran who went to war, was shot, and witnessed his or her friends die.

Also, a person who has been in a major car accident or has survived a mass shooting may develop PTSD.

Patients with post-traumatic stress disorder can have symptoms of being very jumpy or easily startled. They can have difficulty sleeping or difficulty relaxing. Some can even develop numbness, where they have kind of a flat emotional response to various things.

Many patients with PTSD also have mood disorders, such as major depressive disorders. And patients with PTSD whose condition is not treated or managed adequately can be at risk for trying to take their own lives. Read more about the suicide warning signs.

Typically, treatments include therapy, such as psychotherapy or cognitive behavioral therapy, or medications. Often, medications include psychotropic drugs, antidepressants like selective serotonin reuptake inhibitors, and benzodiazepines.

If any of these symptoms have affected you or a loved one, please consult your physician. Find out if you have an anxiety disorder, and what the best treatment for you might be.

Anxiety disorders are so common, but, unfortunately, we don't really talk about them that often. As always, do live your healthiest and happiest life.

13 Panic Attack Symptoms: How To Recognize One

5 Ways Stress Affects Your Body and How To Reduce Stress

What Is Hypomania – Symptoms Of Bipolar Disorder 2018
← 10 Healthy Habits For A Better You And A Better LifeWhat Is Sickle Cell Anemia? Symptoms, Diagnosis and Treatment →