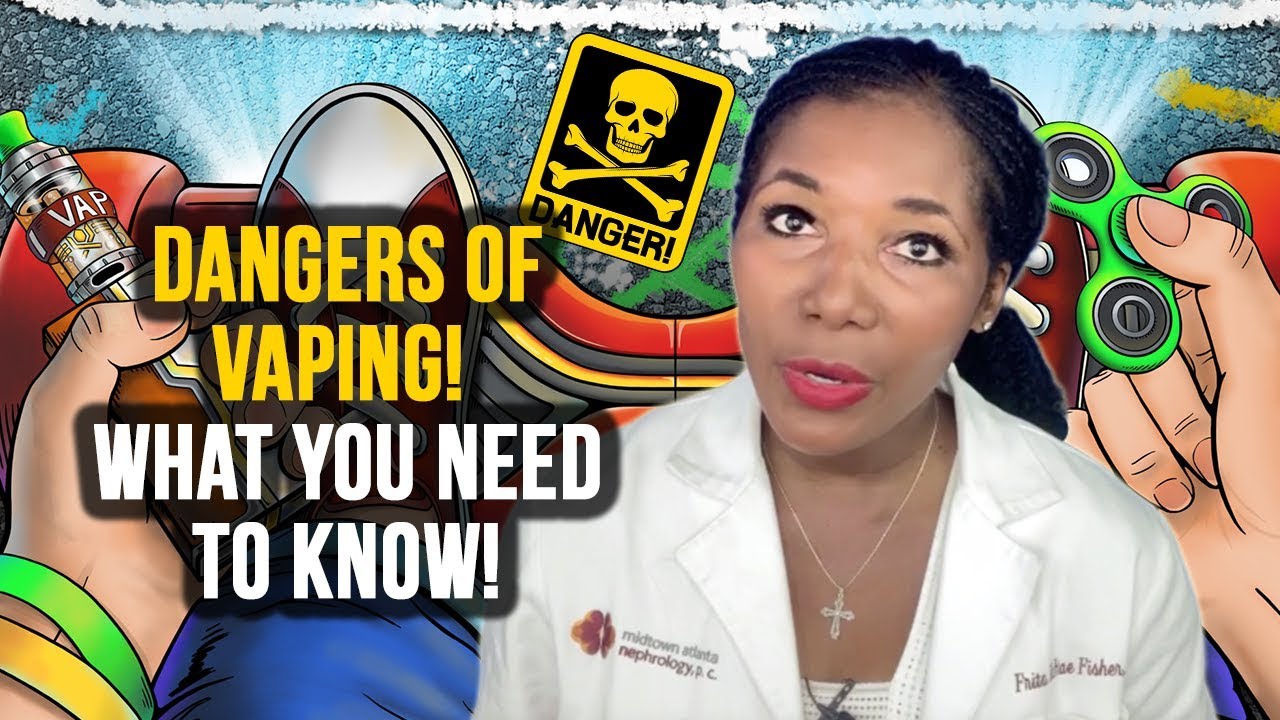 Vaping, juuling, e-cigarettes, vape pens. What? E-cigarettes, or electronic cigarettes, have been all over the news. They were initially presented as some great savior that would help millions of adults to quit smoking. But as of late, vaping and e-cigarettes have been getting some pretty bad press. Some of the e-cigarette companies have been accused of using e-cigarettes to lure youth and teens into lifelong nicotine addiction. Some people accuse e-cigarettes of being a gateway to using illicit drugs. Do you want to know the truth about vaping? Here are the dangers of vaping explained.

I recently received a frantic phone call from a family member. She was upset because her grandson who had been driving her car and apparently left an e-cigarette in the front seat. She called me, and she was like, "What does this mean? Is he on drugs? Can you smoke marijuana with these e-cigarettes? Is an e-cigarette going to blow up in his face?" This line of dramatic questioning made me realize that there really is a lot of confusion out here on e-cigarettes or vaping. So today, I'm going to discuss vaping, its origin, benefits, health risks, and what you need to know about vaping.

I am now doing monthly YouTube lives where I answer your questions in real time. I do a live Q&A. If you haven't done so already, be sure to hit that subscribe button on my YouTube channel and press the notification button so you know exactly when I'm going live. 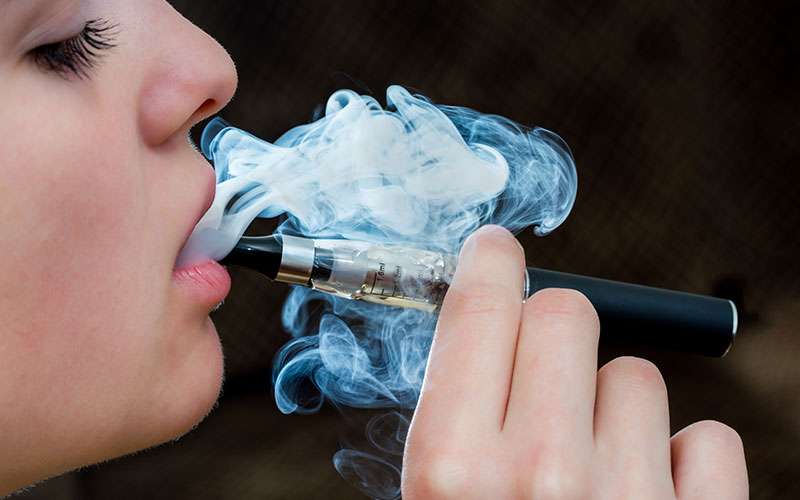 The e-cigarette was initially developed in China by a Chinese pharmacist who developed it in order to help himself to quit smoking. The original intentions were really good. The original e-cigarettes were very similar to what real cigarettes look like. In fact, they called them 'cigalikes'. They were disposable initially, and then there have been many generations of e-cigarettes since. And now, the most popular e-cigarettes are the pod mods made very popular by the company JUUL. These electronic devices are very small and they look like a USB flash drive, making them very inconspicuous and easy for teenagers to hide from teachers.

What is good about vaping?

Though we have very limited short-term data, the consensus among most experts is that vaping in adults is less harmful than smoking tobacco, according to the limited data that we have.

You see, when you smoke cigarettes, you actually burn the tobacco, and the carcinogens, and the other chemicals, and you are inhaling smoke. That smoke enters the lungs. You get tar, which can cause all kinds of issues. The tar and the other carcinogens can cause lung cancer, and they're also associated with kidney cancer, skin cancer, throat cancer. We know these things to be true from smoking tobacco.

When you inhale nicotine vapor, while the nicotine is addictive, we don't have any evidence to show that the vaporized nicotine in and of itself kills. So, we believe that vaping nicotine is less harmful than inhaling cigarette smoke. That being said, e-liquids have been found to have other materials and other chemicals that are also being vaporized which can be very potentially harmful.

What Is Molly? Side Effects You Should Know

Does vaping help you quit smoking?

What's another good thing about vaping? Well, vaping has actually been shown to be effective in helping adult cigarette smokers to quit smoking. In fact, in a randomized trial published in The New England Journal of Medicine, it was shown that using e-cigarettes was actually more effective than nicotine replacement therapy in helping with smoking cessation.

That being said, many people who are cigarette smokers and then turn to e-cigarettes to stop smoking become dual users, meaning they're smoking cigarettes and vaping or using e-cigarettes at the same time. 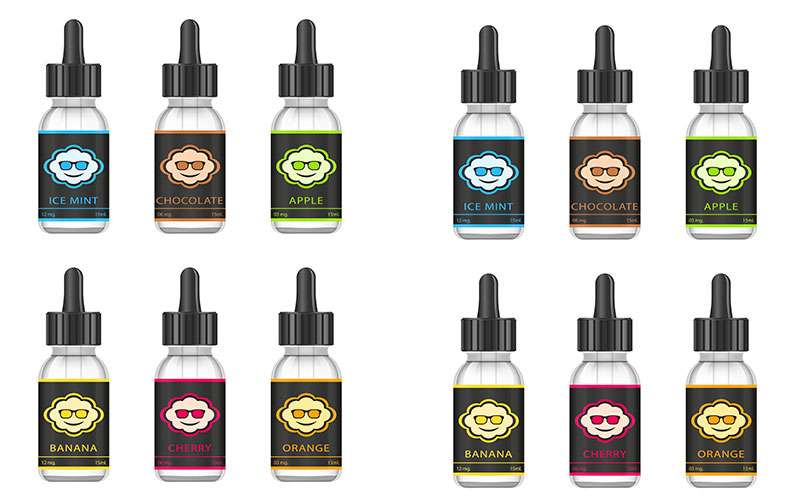 So, what else is good about vaping? Well, e-cigarettes come in flavors like mint chocolate, bubblegum, blueberry. The consensus is that these flavors make the e-cigarettes taste better than traditional cigarettes and smell better than traditional cigarettes. But is that really a good thing? Not really, because the fact that these e-cigarettes smell better and taste better can make people who normally would be repulsed by smoke and walk away from cigarette smoke, if they're inhaling the vapor that doesn't smell offensive, they might stay there and get exposed to nicotine or other chemicals in the vape. Also, these attractive, fun, fruity flavors make e-cigarettes attractive to teenagers.

Top 5 dangers of e-cigarettes and vaping

Danger #1: Vaping is attractive to teenagers.

Even though vaping was initially presented to stop adult cigarette smokers from smoking to get them to quit tobacco, with all the fun fruit flavors of e-cigarettes and the marketing that has young, cool, hip people using the e-cigarettes, it's become very attractive to teenagers, so much so that now over 3 million youth actually vape. 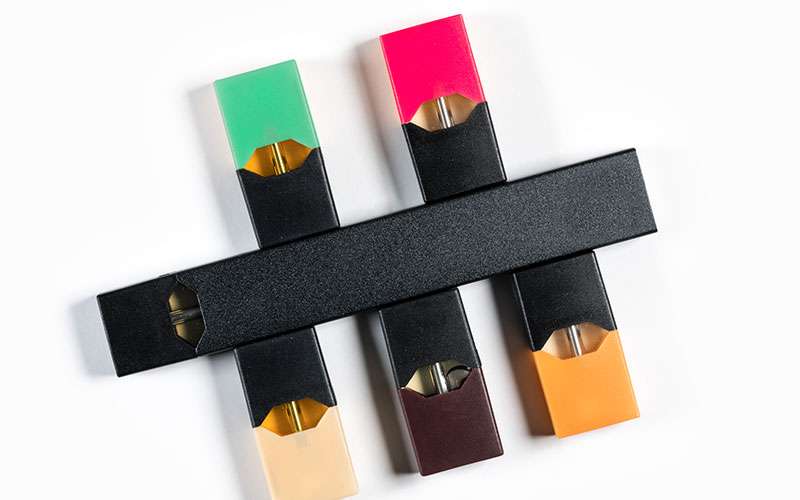 And with the e-cigarettes now looking like tiny little USB flash drives, that makes them even more attractive because they're inconspicuous. You can hide them from parents and teachers. And with the pleasant smells, they're not offensive. So as a teenager, you're less likely to get caught.

The e-liquid or the e-juice that comes with e-cigarettes can have different concentrations of nicotine. Some of them have 36 milligrams per milliliter of nicotine and some have even more.

Now, in a typical traditional cigarette, the average user will only receive one milligram of inhaled nicotine. So you can imagine if in this tiny cartridge you're getting over 36 milligrams per milliliter of nicotine, you can actually even have more exposure than you would've had actually smoking traditional cigarettes.

In children, nicotine can cause a decrease in impulse control, a decrease in their concentration. And when you get these nicotine crashes, you can also have increased depression and increased anxiety if you are a teenager who's addicted to nicotine.

Danger #3 of vaping: The e-liquid or the e-juice is not strictly FDA regulated.

What does that mean? You don't necessarily know what is in the e-juice that you're inhaling. So in traditional e-liquid, it contains the liquid nicotine, propylene glycol, and some flavoring. But, some studies have revealed that different e-liquids can contain some actually harmful or potentially carcinogenic or cancer-causing chemicals.

For example, some e-liquids have formaldehyde. Some have diacetyl, which has been shown to cause chronic lung disease or popcorn lung. Some e-liquids also have benzene, which has been linked to leukemia. They've also found that certain e-juices contain metals. So because the e-liquids or the e-juices are not strictly regulated, if you're using an e-cigarette, if you're vaping, you don't always know what you're inhaling.  So you really don't quite know exactly what's going into your lungs and into your body. You don't always know what you're vaping when you're vaping. 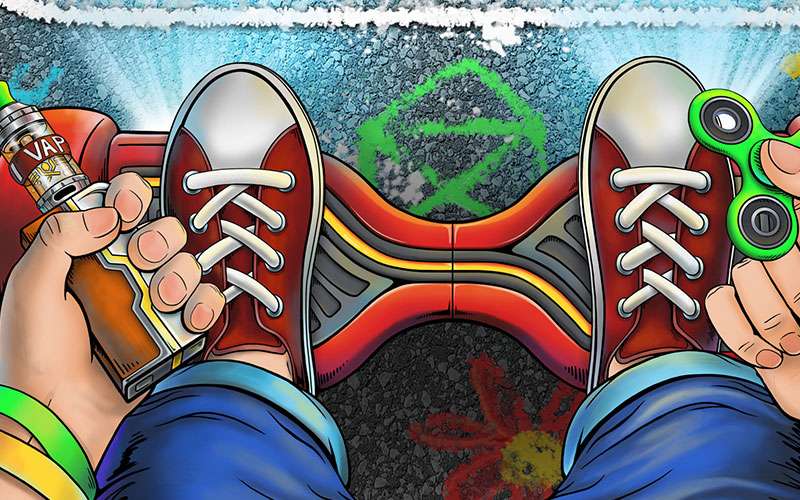 Danger #4 of vaping: The long-term effects of vaping or e-cigarettes are not known.

We've seen this in big tobacco. Back when cigarettes first came out, or at least the marketing became really popular, people actually thought that they might be healthy. And when the different scientists were saying, "Hey, cigarettes are causing cancer. Cigarettes are killing," the big companies actually fought that notion for a long time.

Now, years and years and decades out, we have all this data on cigarette smoke and we can say, "Oh yeah. The long-term effects are bad." Well, we're still at the beginning with vaping so you won't find anyone who stands up and tells you that vaping is healthy. What we can tell you, that according to the short-term data, vaping appears to be less harmful than cigarette smoking. But again, we don't know what's going to happen in the long term.

Danger #5: E-cigarettes can blow up in your face!

Now, these e-cigarette accidents are rare, but they do occur, and there have actually been some fatalities, some deaths wherein using these battery-operated electronic devices to vape, the vape or the e-cigarette has actually blown up.

In one report, it blew up in a man's face. He lost seven teeth. In another report, a man lost a portion of his lung. A hole was blown in his lung. In another incident, the man received severe burns. Also, some children have gotten a hold to e-liquid, ingested it, and have had fatalities as well. So even though these incidents are somewhat rare, they're real.

There are some other issues with vaping as well. For example, people with asthma, specifically teens with asthma, for whatever reason, oftentimes are attracted to vaping, and vaping has been shown to exacerbate or to make symptoms worse in asthma.

This ends my overview of the truth about vaping. What is the truth? The truth is that vaping can be an effective tool in getting adult smokers to quit smoking. That in and of itself is wonderful. But, the truth also is that we really don't have any long-term data. So while we may feel that vaping is less harmful than cigarette smoke, we cannot guarantee that for the future. And of course, smoking or inhaling nothing will be the safest of all.

The dangers of vaping are real, so please share this video with parents, with other people who have questions about vaping, and I want you to comment down below. If you're a person who vapes or if you're a person who uses e-cigarettes, comment. Let me know what you feel. Do you feel that all of this talk about dangers is overkill? Let me know. Have you had a bad experience with vaping? Are you one of the people who has witnessed and e-cigarette blow up or you've seen it happen? Are you a teenager, and do you notice that other teens in your school are vaping? Do you have an addiction to nicotine? Are you someone who has to sleep with the e-cigarette under your pillow practically because you need that nicotine fix? Please comment. Let me know.

Pancreatic Cancer Risk Factors, Causes and Symptoms
← What Is Dry Drowning? Warning Signs You Should KnowMeasles Outbreak In 2019: Signs and Symptoms →