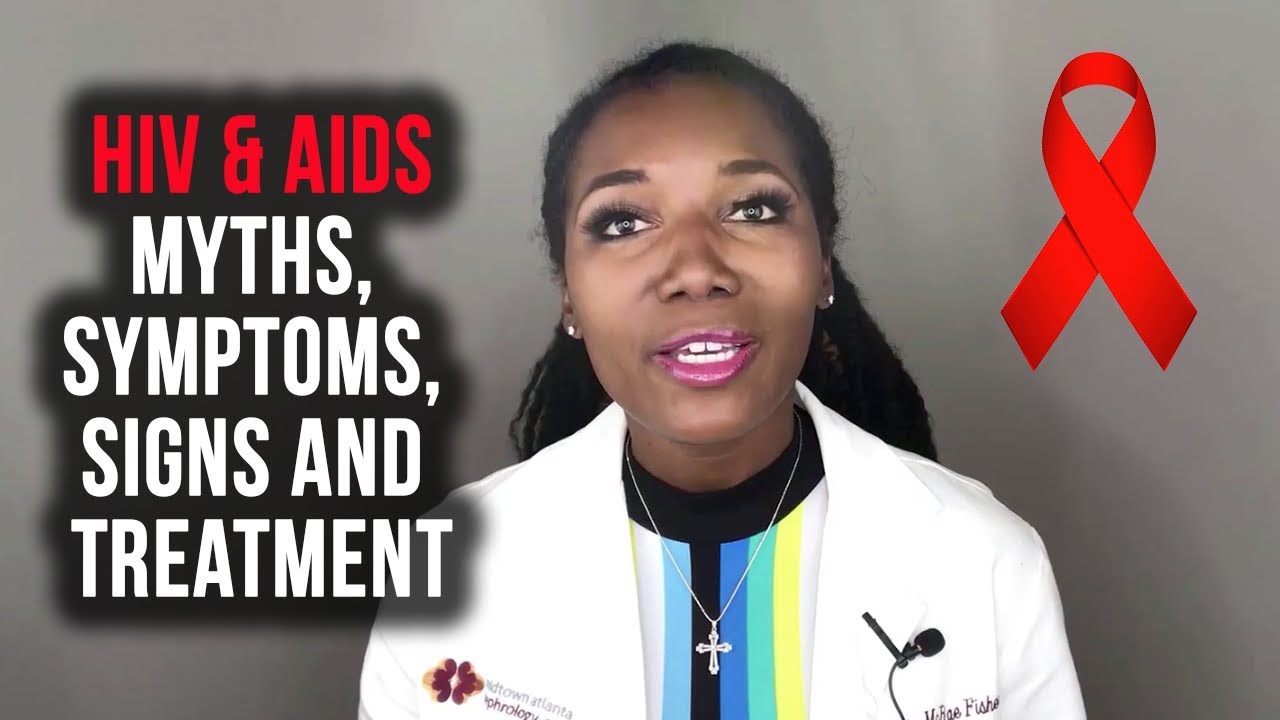 HIV myths, symptoms, signs and treatment. December is HIV and AIDS Awareness Month, and when I was talking to a couple of my patients who are living with HIV and they were all excited and getting ready to go to one of the World Aids Day celebrations that were held in Atlanta, it reminded me of how many resilient, brilliant patients I have who are living with HIV. On the other hand, it also made me think about a lot of patients who actually still believe a lot of myths and misconceptions about HIV right now.

One myth is that HIV is just a gay man's disease. Wrong. Another myth that some people still believe is that HIV can be caught from just casual contact. Wrong.

And one of the scariest myths that some people still believe is that people with HIV or AIDS have a certain look. They look like they have AIDS. That one is so wrong.

Over 36.9 million people worldwide are living with HIV. It is still a major epidemic.

Over the next several minutes, we're going to have a little chat about HIV and AIDS. I'm going to discuss the risk factors, the symptoms, how HIV is spread, and how HIV can be prevented.

AIDS was first identified in the United States back in 1981, and at that time, it was believed to be a gay man's disease, and sadly at that time, very little or no efforts were put forth toward prevention or toward research.

Well, very soon it became evident that HIV crosses all color lines, cultures, races, religions. It crosses all socioeconomic lines from Charlie Sheen to Freddie Mercury to Eazy-E to Magic Johnson. There's no particular look of HIV. You can't put HIV patients in a box.

Though there is no definitive cure for HIV yet, there are many highly effective treatments which can allow that virus to be suppressed to an undetectable level, meaning that people who are infected with HIV can still have strong immune systems and live normal lifespans.

HIV, or human immunodeficiency virus, is a virus that attacks the immune system.

When that virus is allowed to proliferate, it's not treated properly, you can progress to AIDS, which is when your CD4 count is less than 200 or if you have one of the AIDS-defining illnesses, like lymphoma or candidiasis or yeast in your esophagus. Basically, AIDS occurs when the HIV weakens the immune system to really the lowest state.

How is HIV spread?

Say you use a straw that a person who is infected with HIV has used, and if the tip of that straw has come in contact with some broken blood vessels in the infected person's nostrils and now you use that same straw and it comes into contact with your bloodstream through your nostrils, then, yes, you can get HIV that way.

Another way to get HIV is through needle sticks. If you're a healthcare provider and you accidentally stick yourself with a needle that has been used by a person who is HIV positive, you can get HIV that way. And, very rarely, patients who are pregnant and HIV positive can pass that HIV to their unborn child or pass it on during childbirth or through breastfeeding if they're not properly treated.

Who is at high risk for HIV?

Anyone who is having unprotected sex, particularly with multiple partners. Men having sex with men are at high risk, people who are professional sex workers. Also, people who share drug needles or share drug paraphernalia.

Other people at high risk, if you received multiple blood transfusions before 1984, that's a risk factor. New HIV diagnoses have the highest rates among African Americans. Even though blacks only make up 12% of the population, African Americans account for 44% of the new diagnoses with HIV.

What are the symptoms of HIV?

When someone is infected with the HIV virus, symptoms usually develop between two and four weeks after exposure. These symptoms are difficult to recognize because they tend to be flu-like or like a common cold.

Symptoms include fever, sore throat, rash. You can have diarrhea, nausea. You can also get inflamed or swollen lymph nodes around the neck or even down in the groin. These symptoms tend to go away, and if you're not tested or suspicious, you could miss that you have that diagnosis and then go back to feeling completely normal.

Some of the later symptoms of HIV can occur months or even years after initial exposure, and some of these later symptoms or signs can be candidiasis or yeast thrush that is down in the esophagus, the digestive system. Also, if you get candidiasis in the lungs or in the trachea, in the bronchioles, that can be associated with HIV. Certain cancers are associated with HIV, such as Kaposi sarcoma, lymphoma. All of these are late signs of HIV infection.

*Disclaimer: Lymphoma and Kaposi’s Sarcoma can be associated with HIV, BUT these cancers can occur in HIV NEGATIVE patients, as well.

Who should be tested for HIV?

Well, according to the CDC, Centers for Disease Control and Prevention, everyone between the ages of 13 and 64 should be tested for HIV at least once, and there are many types of testing you can get.

If you go to health fairs or if you go to your health clinic or just consult your physician, you can find out how you can be tested. There are rapid HIV tests that are now available, and the rapid test can be done using just a finger stick or pinprick or using oral secretions. The results typically come back within five to 40 minutes.

Now if you are found to be HIV positive on a rapid test, you do need a repeat or confirmation test of another type. There are other, more standard tests that actually involve a blood draw through the vein, and these can test for the HIV virus or HIV RNA.

They can also test for the HIV antigen or the antibody to HIV. These test results usually will come back within a few days. There are even home HIV tests that are available, and these tests can also either use a finger stick or a pinprick or they can use oral secretions as well. There are anonymous tests as well.

There are all kinds of options, so there's no reason that you should be infected with HIV and not know it, and the earlier that you find out, the better, because the earlier the diagnosis of HIV, the more effective the treatment, the more likely you are to have a long life with a strong immune system. Don't sit in the dark, don't be in denial. Go out and get tested.

How do you prevent getting HIV?

Well, the best way to prevent is not to engage in high-risk behavior. If you're having sex, make sure you are using a latex or polyurethane condom. Make sure that you aren't sharing drug needles or sharing drug paraphernalia.

If you are a healthcare provider, use all safety precautions when dealing with body fluids or when dealing with blood. Another wonderful way to prevent HIV is by taking preventive medication, something called PrEP, pre-exposure prophylaxis.

The pre-exposure prophylaxis, or PrEP, is actually an anti-HIV medication that is taken by people who have not been infected with HIV, and it is evidence-based that PrEP can decrease HIV transmission by more than 90%.

If indeed, you are HIV positive, there are many, many effective treatments and anti-retroviral medications. These medications have gotten better and better over the decades where they have fewer side effects and they're more effective in fighting HIV.

If you take these medications, you can have a normal lifespan. You can suppress the HIV virus to the point where it's undetectable. You can have a strong immune system and you can have a healthy life. So, if you think that you have been exposed to HIV, again, don't be in denial. Get tested and get treated.

This concludes my overview of HIV myths, symptoms, signs and treatment.If you are someone who is living with HIV, please comment down below, be an encouragement to someone else. Please, help teach us something.

Remember, practice safe behavior. No matter how high of a pressure situation you're in, always try to be wise and make sure you use a condom, you make wise choices. And if, indeed, you have been exposed to HIV, face it head-on, look for support groups.

Consult your physician. Be honest with your physician. HIV is everywhere. There's no face to it. You can't just stereotype people. I guarantee you sit by people with HIV on the bus, you ride in the airplane with them. You hug them, you see them at church. HIV is here, but we are fighting to eradicate it. Please take care of yourself. Do your best to live your healthiest, happiest life.

What Is Molly? Side Effects You Should Know